Have you ever hoped that depression had an official webcomic? Me neither. But there is one that stands out as being sadder than the rest. And by “stands out”, I mean “slumps down in quivering half-hearted mediocrity”.

Robot Hugs isn’t so much a random, slice-of-life webcomic with a well-defined premise as it is a webspace where the author can dump his sad doodles, and sometimes make long, rambling illustrated tangents on whatever social justice activism that holds his interest, usually things like transgenderism, which the author identifies as being a part of, and feminism, because the author so desperately wants the female community to accept him as one of their own.

Early entries to Robot Hugs are usually random, inane drawings that really have nothing to them. Take this random example:

That’s not a random panel from a strip. The previous and following comics have nothing to do with it. This is the build-up, delivery, and punch line. There is only one panel in this entry, and that’s it. No point, no effort, and no worthwhile thought.

Stick figure art is something that can be done well. In fact, some pretty good webcomics have been done with stick figure art, such as Cyanide & Happiness. In the vast majority of cases, however, it’s a cop-out that’s used to produce a sub-par product with a minimum of effort while leaning on the crutch of “style”. In some of those cases, it’s how talentless artists are enabled to coast along with a minimum of effort. In the case of Robot Hugs, there is some small sign of improvement as time went on, but it usually involves the bare minimums of stick figure art, such as good color choices and better-defined lines. Expressive facial features are sparse, but that can be sold as minimalism. At one point, he even takes on shading, but gives it up before long. Robot Hugs takes a style that’s mainly ironically likeable for its minimalism, and takes it even lower.

And then, with no warning, the author backs down from all the progress that he’s made on his style and goes to a hand drawn style that’s even worse: 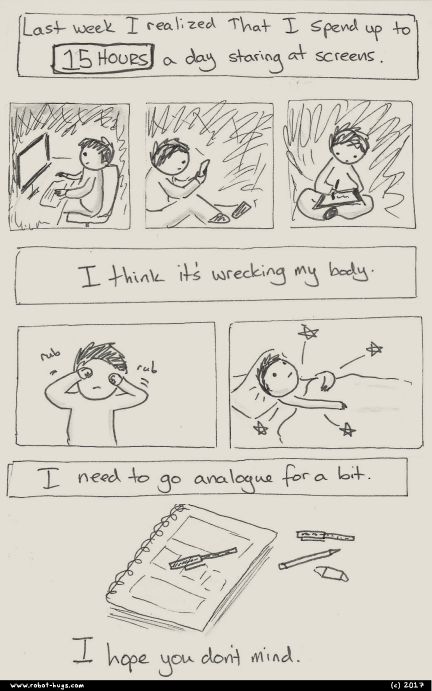 To be fair, he does give a reason for why he does this. However, there’s something more to it, which we can read about on his profile: The author studies in UX/IA, which has to do with website design. So he actually does spend a significant amount of his life staring at display screens. However, when one looks at his own website, how exactly is he putting his knowledge in website design into practice? He’s obviously not new at this, as his archives indicate that he’s been at it since 2009, and he usually updates about a half-dozen times a month with webcomics that are sub-par in quality.

Considering all this, and assuming that the author is trying hard, I suspect that the source of his ongoing sadness is that he’s putting a disproportionate amount of effort into something that he doesn’t really have a talent for. As children, nearly all of us are told that “we could be anything we want to be”. This is a disastrously terrible thing to tell a child, as it sets them up to pursue interests that are outside their own talents, and develop such an emotional attachment to their pursuits that they make them a part of their identity, making it an even stronger hit when they fail to live up to the expectations set for them.

The author of Robot Hugs doesn’t want to stare at display screens for long periods of time, and his webcomic has been insubstantial in quality since its inception over 9 years ago. Perhaps it’s about time for him to admit that it’s not his thing to either design websites or write webcomics. What he does instead, I don’t know; that’s the kind of thing that he can only determine after careful consideration of himself and how he can benefit society. However, it’s clear that making webcomics is not his thing.

Unless you can look at this and think “talent”: 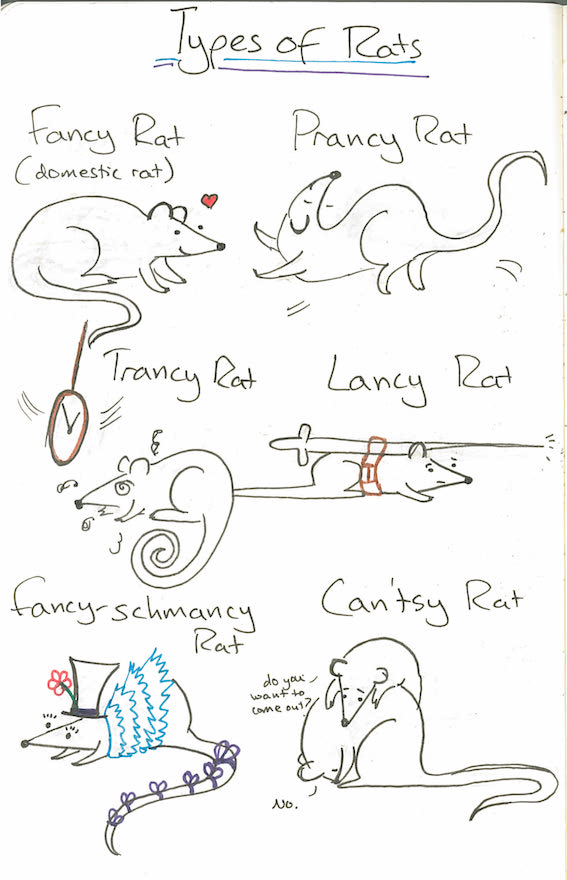 The parts of his comic that are the most well-thought-out would be his SJW ramblings, which is not a compliment. If your only exposure to the SJW ideology would be YouTubers who make fun of them, go ahead and read an opinion piece from a veritable SJW. What you’ll find out is that the aforementioned YouTubers aren’t making up strawman arguments, they are actually taking on the SJW ideology itself, exactly as it’s presented when SJWs speak for themselves.

Here is a link to an example comic. (WORKSAFE WARNING: If you click that link, your employer’s IT department might think you’re an idiot.)

And speaking of worksafe warnings, the following came from the Robot Hugs “About” page:

NSFW comics are generally labelled as such.

Except they’re not, so his archives are a minefield of cartoon penises and vaginas that you might object to if you are somehow upset by naturally occurring features of human anatomy, or if you have a problem with these things being drawn poorly. The main character’s nipples might be considered explicit, considering that he’s a biological male who identifies as a female. Would they be? Have we figured it out yet?

And, as if it weren’t already obvious that this comic stars a self-insert, the author uses the webcomic to give us life updates:

Whoop-dee-doo. Too bad your new tablet didn’t do anything to make your comics any better. You know what would? Having someone else do your art. And your writing. And your website design, for that matter. In fact, maybe you should pull a George Lucas and sign over creative control of your comic. Too bad that a guy would have to be insane to take this mess on, and once they come to their senses, they’d deep-six the whole thing.

The author of Robot Hugs spends too much time trying to be something he’s not: a webcomic artist, a decent website designer, even a woman. He doesn’t have what it takes to do any of these things; it’s time for him to stop kidding himself.

Robot hugs gets a score of a-sad-excuse-for-a-comic out of ten.

Which would be a 0.5 out of 10. If you’re thinking of making your own webcomic, you can do a better job than Robot Hugs with just a little something called effort.