As most people do, I face a number of challenges in my day-to-day life. These include succeeding at my job and also managing my finances so that I’ll have enough money to pay the rent month-to-month while still having enough to eat. If, on top of the challenges of typical life, one were to be exposed to the issues facing society as a whole through social media and corporate information outlets, it’s easy to develop a bleak outlook of the world.

Because of this, it’s understandable that a person would want to unwind with some entertainment. This escapism to idealized worlds of fantasy can be just what a person needs to help them forget, at least for a short time, the problems that that person and society as a whole faces, and in some cases permit them to retain some sanity.

It can be quite distressing when the entertainment media outlets that a person chooses can start taking up issues and causes, and in so doing, become yet another polarizing voice in a divisive political landscape. When this is the case, a person’s choice of escapism ceases to be a means of escape, and oftentimes, this leads to a person finding another source of entertainment altogether. After all, if a product that a person purchases ceases to serve its essential purpose, it can be discarded and a replacement sought out.

The observation of this phenomenon has led to the popularization of the phrase, “Get woke, go broke“.

What it means to get woke is to experience an awakening in awareness of issues and causes, usually from a left-wing perspective (those on the right tend to prefer the expression “red pill”). What it means to go broke is self-explanatory; it suggests that there’s a price to pay in using one’s position to further an agenda.

There is a wrong setting to soapbox.

The entertainment industry is one such wrong setting, and the industry itself is having a pretty hard time learning that lesson. In fact, facing correction in this regard, it would seem as though the entertainment media are digging their heels in, though it’s not really benefiting them to do so. There are many examples to pick from.

The film industry has decided to pander to intersectionality. Superficially, the idea is to provide a voice to oppressed groups such as women, minorities, and the sexually non-conforming. This has the appearance of “standing up for the little guy”, but is devious in that it is used as a means to come away with a moral victory in the event that a movie doesn’t do so well. If a movie does well, it’s a victory for oppressed minorities. If a movie fails, it’s because those who didn’t go see it are racists, misogynists, or homophobes.

Since going to Disney, Star Wars decided to take on intersectional pandering. Since this became the case, the Star Wars fandom has gotten quite scary. They’re so sick of what Star Wars is becoming, that they are actually wishing failure on the more recent Star Wars films. This includes the new Solo movie, which they declared a blackout on. Since then, the Solo movie failed at the box office, and Star Wars fans are actually celebrating this. While it seems like Kathleen Kennedy is close to being dismissed as the person in charge of Star Wars, if that’s the case, Disney is being quiet about it, perhaps because they want to deny the Star Wars fandom its victory.

The Star Wars brand and its fans have turned on each other, and it’s an ugly sight. It’s especially difficult for those who just want to enjoy Star Wars without getting into the fight.

The comic industry has pandered to intersectionality for a long time, so it shouldn’t be the least bit controversial to say that they have. What’s really interesting is that independent publishers that refuse to toe the line are gaining in popularity, and comic book shops that have long since sided with intersectionality have no idea what to do about them. In some cases, they’ve even turned away paying customers just for wanting their products. The author of a rising star comic series called “Jawbreakers” has voiced his disagreement with the mainstream narrative, and his comic is being sought out by sympathetic comic readers, even though his political opinions aren’t being expressed in his comics. Another comic gaining in popularity as a result of the consumer uprising would be Cyberfrog, which amazingly raised over $300,000.00 through crowdfunding!

The comics industry should never have ramrodded a political narrative into their products to begin with, but since they’ve decided to, it’s nice to see that consumers have strongly expressed what they really wanted by throwing huge piles of money at the alternatives. It’s sad that a divide occurred between the comics industry and its consumers, and it could have been prevented with the understanding of the principle that there is a wrong place and time to soapbox.

Thankfully, The Pokemon Company has remained politically uninvolved. That’s great for me, because Pokemon has long been one of my favorite games, and it would be sad to see the company co-opted by a rather vocal and short-sighted minority.

Not everyone in the Pokemon community is the same way, as indicated by Bulbagarden’s Twitter feed: 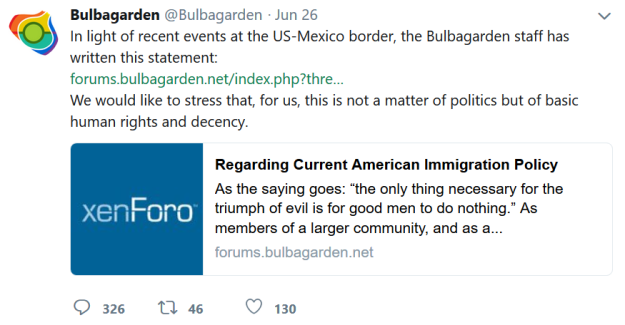 The events at the US-Mexico border being referred to are the arrest of people who have entered the United States illegally (instead of through proper channels), and the decision was made not to take their children to jail along with them. The corporate media, tripping over itself as usual to make Trump look like Hitler, is making this out to be Trump tearing families apart.

I decided to check out the thread on Bulbagarden forums, and the virtue signalling hits you right away on the forum header:

Yes, Bulbagarden wants every child that visits their forum for Pokemon discussion to know that they can embrace their sexuality. Anyone see a problem, here?

As you would expect, the OP uses hyperbolic language to describe what they perceive as happening. Whether an intentional leftist shill or some unwitting pawn in a larger game, the outcome is just the same.

We would like to stress that, for us, this is not a matter of politics but of basic human rights and decency.

In saying that they don’t see it as being about politics, but about basic human rights and decency, you’re not allowed to disagree with them without being a horrible human being, and if you don’t watch yourself, they might sic Antifa on you.

If it’s not about politics, why did the forum post encourage us to contact members of the House of Representatives or the Senate? Believe it or not, people don’t see politics as just some game where the parties are likened to some stupid sports teams. We know that politics are ideologically driven, which is why it matters so much that the people who are voted into office have their heads on straight. When it comes to matters where legislation offensive to human decency is enforced, the people who can make the biggest difference the fastest are elected officials.

And when the matter came to Trump’s attention, he signed an executive order ending the Obama-era legislation that separated families. So how about thanking him?

Thankfully, the very first reply to this thread shows that someone on Bulbagarden forums is thinking:

There’s my point. A community about Pokemon is no place for politics. At best, it’s off-topic. At worst, it’s divisive, and could tear the community apart regardless of how convinced you are of the nobility of the cause. When it comes down to it, a Pokemon community is where a person goes to get away from the world’s problems, not where moderation abuses their positions to push their own agendas. If the community is no longer a place that serves its purpose, people will go somewhere else for a community that does.