A long-running tradition in the Pokemon anime is that of the poke-girl, the female traveling companion in Ash’s party. It started with Misty, continued with May, and went up until the seventh gen which gave us a few poke-girls instead of the usual one (Lillie, Lana, and Mallow). It would appear that the newest step in Ash’s journey would take things in a different direction by teaming Ash up with a boy named “Go”, and that a girl might not be traveling with Ash for this part of his journey.

Or is that really the case?

Japanese viewers have noticed that Go has been blushing a lot, which tends to happen often with female characters in anime.

I could also point out that Go has stylized eyelashes, a feature that is usually only seen in anime girls and women.

Is Go’s character a play on gender politics in a similar way to Samus from Metroid? Or is he simply an expressive male?

There is another mystery here, and that’s that Go is blushing at all. Blushing, or turning flush, is a feature of Caucasians. Blushing occurs when there is a sudden rush of blood, which is a physical reaction to awkwardness. With darker-skinned individuals, it’s less apparent that this rush of blood is taking place. When you put Go side-by-side with Ash, it’s plain to see that he’s not Caucasian. 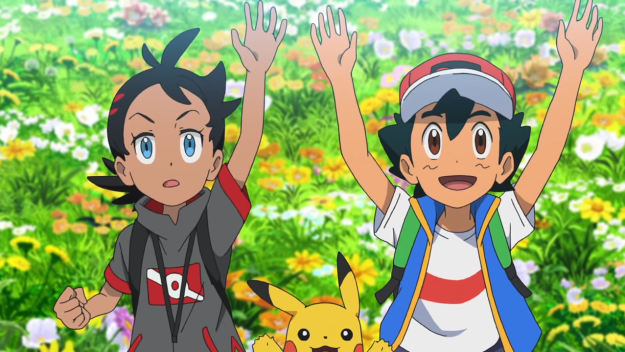 As one could easily point out, Brock had darker skin too, and he was a legendary blusher. It would appear as though blushing in Pokemon was a stylistic choice, or perhaps was decided on by a team of Japanese animators who didn’t have access to many non-Japanese people to use as reference.

Also, what is up with those red clips in his hair? And those thin eyebrows? Were the writers of the Pokemon anime trying to pull one over on us?

3 thoughts on “Is Go from Pokemon secretly a girl?”