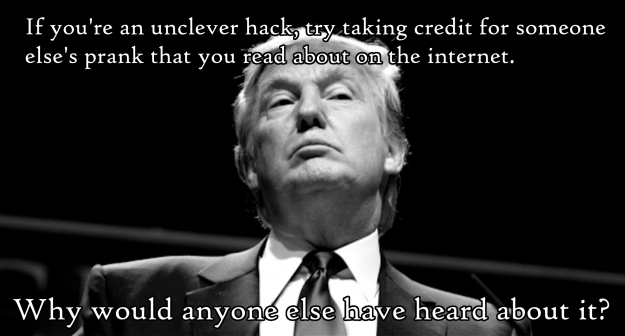 Earlier, I overheard someone say something about how he trolled supporters of Donald Trump.

I don’t believe that the guy actually approached Donald Trump supporters and attributed inspirational quotes to him. For one thing, I know the guy well enough to know that such an activity was well outside his range of usual activities. But my main reason for not believing him will become clear by the end of this post.

Still waiting for the punch line? Sorry, that was it.

Believe it or not, Adolf Hitler was capable of sometimes not sounding horrible. There was a reason why the guy had a following. Being a hateful, genocidal maniac doesn’t make for a very attractive political leader.

Now for the main reason why I don’t believe that this guy actually approached Donald Trump supporters about anything: In 2013, a Pinterest user posted pictures of Taylor Swift with inspirational quotes. You probably already see where this is going. On August 30 of that same year, the same Pinterest user was called out for attributing Hitler quotes to Taylor Swift. She was trolling.

After that, legions of copycats started popping up and doing the same thing, as though the rest of us don’t also have access to the internet and could have read about the same joke on Reddit.

Look, Donald Trump is a political figure. If you don’t like him, point out what’s wrong with what he stands for.

But if you’re an unclever hack, try taking credit for someone else’s prank that you read about on the internet. Why would anyone else have heard about it?