I’m aware that there is another webcomic by the same name that came before, and that it’s somewhat stylistically similar. But that’s not the strangest thing about Jack.

This webcomic is classified as “horror” on The Duck, but I really don’t know how to classify it because most horror comics demand that it be taken seriously. Otherwise, it’s a particularly sick comedy. But hey, it doesn’t do particularly well at either, so whatever frame of mind you get into as you read this, you’re not bound to enjoy Jack very much.

Jack stars the title character, who is a man in a hockey mask who was supposedly a fugitive of some sort. Jason Voorhees would find this lame. The comic starts out with Jack on a stake, being threatened by a man leading a lynch mob, with Jack and the lynch mob trying to talk the man out of killing Jack. There is a highly unrealistic conversation about the legal consequences of killing Jack coming from Jack himself, because apparently it’s completely realistic to expect that a raving lunatic with a lynch mob at his side would be dissuaded by the legal repercussions of what he’s doing. From then on, Jack is released and sets out to avenge his kidnapping with homicide. But, as it turns out, Jack was actually killed, and Jack was telepathically tasked with rescuing the corpse of the alligator that ate him from the guy who left him to drown by the alligator itself.

Confusing? This comic is only getting started.

In the next story arc, Jack goes to a bar. A prostitute offers him some fun for some money, and Jack refuses. The prostitute does not take this well, so her pimp has him kidnapped in retaliation.

Fast fact: generally speaking, prostitutes don’t get upset if you don’t feel like having sex with them. They’re in it for the money. If they have bills to pay, and you don’t want their services, they’ll just move along and find someone who does.

So, what does the couple do with Jack? They rape him. No really, that’s what they do. We’re already past the point of “what-am-I-even-reading”, so it’s amazing that this comic can further continue its plunge downhill. But it does, and the hero is rescued by some random furry who happened to be walking by.

Where was I? Oh yeah, after this, Jack goes to jail, where he’s allowed to keep his mask, because it seems like standard procedures are suspended in this comic that you’re supposed to take seriously. It’s there that Jack meets someone who knows the people he just killed, and he somehow cuts his ears off when they’re behind the straps of his mask, and Jack does nothing to stop it, even though no one is holding his arms down. 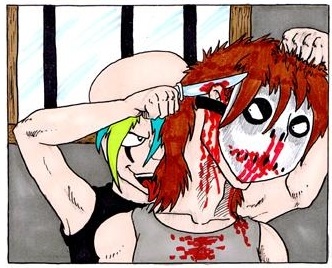 Is it too much to ask that he struggles or does something more than look slightly peeved that he’s being disfigured with a knife?

That’s not an anomaly, either. That’s just how fighting is handled in Jack. Every blow is taken directly with usually no effort on the part of the assailed to practice basic self-preservation. An enemy can be completely upon his victim, with every perceivable advantage, but it’s still the victim’s turn to attack, and the assailant won’t so much as resist until their opponent has finished their attack. Because of this, the fighting in Jack is so stupid that it’s fun to read in a way the author probably didn’t intend.

Yes, I know that the point of all this suffering on the part of Jack is to show how he’s breaking down to the point that he’s the psychopath that he ends up becoming. I know, but I don’t care. This comic is so stupid and poorly-executed that what’s supposed to be tragic instead comes off as funny.

In Jack, there isn’t really one consistent art style. Jack comes off as an experimental comic in which numerous artistic styles are tried, but nothing is really stuck with. The result comes off as something that some high school student drew to show his friends how crazy he/she is so they don’t mess with him/her. Then they honestly don’t understand why they’re still being relentlessly made fun of.

There are parts that are mostly monochrome. The exception would be the blood, which is colored in red, as though we’re supposed to have our attention drawn to it. Aside from this indulgence, this is easily Jack at its best-looking, as it shows that the artist is competent at shading.

Other parts of the comic are full-color, but the colors are bright and garish, and appear to be colored with Crayola markers or an equivalent. Crayola markers are terrible for coloring, and are usually only used by children who don’t have a more sophisticated option available. It’s super-easy for strokes to overlap, which in the case of Crayola markers, results in darker colors where it happens. Someone who is masterful can take advantage of this to create depth, but this isn’t a skill that the author of Jack appears to have.

Then there’s the anatomy. Most humans are skeletal in appearance, which can probably be sold as being stylistic to go with the punk-metal horror style. However, you also notice how muscle tissue is misplaced in such a way as to interfere with a sense of depth, and you know that this comic is drawn by someone who is terrible with anatomy.

Being a furry doesn’t get you off Scott-free. The author only knows how to draw wolf snouts, but that doesn’t mean that she won’t still attempt to put other animals, such as rabbits, into her comics. Behold:

This comic starts out confusing, and then descends into unintentional sick humor. Or was it intentional? It’s hard to tell. Maybe the artist is some kind of super troll, and everyone who points out this comics numerous flaws is playing into her hands in some way that can only be done by making a hilariously bad webcomic. Sounds like an airtight explanation, until you figure that there’s no perceivable benefit to doing such a thing. It’s just easier to say that she’s a bad webcomic artist. Hanlon’s razor and such.

Anyhow, on to the score, which is a there-there out of ten:

I get the idea that this comic is intended to be enjoyed when in a certain frame of mind, which would be achieved by playing heavy metal from your speakers, drinking Kentucky bourbon, and banging your head while making a goat sign. But you could enjoy all that even more by not having this comic have anything to do with it.