I did not alter this.

Today, I did something painful. I’ve read through another bad webcomic. This one is called, “Classes”. It’s a name that’s strangely fitting, because it’s one thing I can recommend to its author.

Classes is easily the whitest webcomic I’ve ever seen. Don’t believe me? Read any page of the webcomic for yourself. Such as this one, which happened to be the most recent one as of this posting. Then do your eyes a favor and return to this page, quick.

I can assume that the reason why this webcomic is so white is because the author is trying to make it stylistic. Most pages don’t use panels; the comic reads from top to bottom with sequential drawings. It’s an interesting idea, but the result is a webcomic that hurts my eyes. Personally, I wouldn’t have minded narrowing the many super-wide margins, because as it is, Classes is like staring into an LED flashlight. 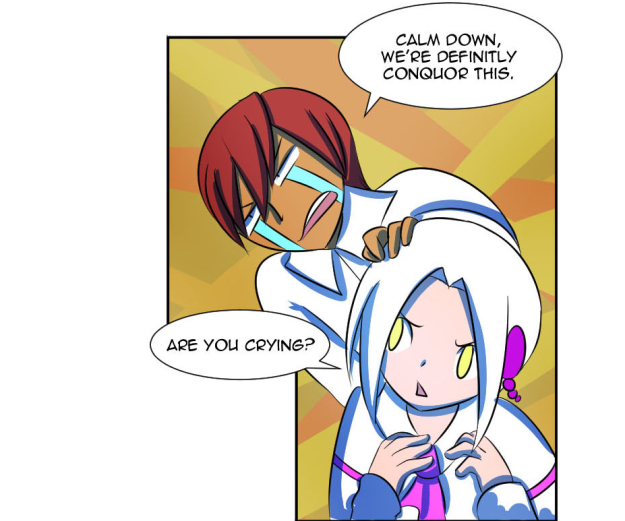 When some people see the manga style, what they see is something stylistic and visually appealing that they’d enjoy drawing and that their audience might enjoy seeing. They would be the people drawing manga for the right reasons. When other people see the manga style, they see a formulaic and easily-replicable art form that they could use as the visual vessel for their poorly-written stories with minimal effort, which they can sell by saying that they’re being stylistic. They would be the ones that decide on the manga style for the wrong reasons.

Yes, I know that there are high-quality manga out there. Some of the best ones have a simplistic and messy style, such as those drawn by Ueda Hajime, while others pay heavy attention to anatomy and composition. Those manga aren’t a problem. What’s problematic is when the manga style is used as an excuse to put less effort forward.

A novice artist might discover the manga style, then start drawing his characters with rounder faces that look flatter when viewed head-on, and drawing pointed chins that often disappear when a character’s profile is viewed. Part of the style. But then you notice that they’re drawing each of their characters in the chibi (simplified and child-like) style, and you suspect that they’re cutting corners, as Japanese artists typically only use the chibi style in certain circumstances. Even that can probably be sold as being stylistic (not that Teen Titans Go is off the hook).

But look closer, and you’ll see the mistakes. Okay, you probably don’t have to look close. The art has a rushed look to it, like manga is going out of style, and someone is in a hurry to make a quick buck off of it, even if they don’t know how.

One of the biggest mistakes that novice manga artists make is drawing the eyes as blank and shallow. Unless the character you’re drawing is in some catatonic state, the eyes should always look deep and expressive, even when it’s clear that everything else about your character is heavily chibified. Consider this example:

To make your manga characters really pop, you get the eyes right, even if you get nothing else right. There’s a reason for this: when people look at other people, their gaze is naturally drawn to the eyes. When looking at a person’s eyes, it’s easy to determine their mood and sometimes even their intentions. Because of this tendency, manga style is easy viewing because the eyes are larger and easier for viewers to find.

How does Classes do eyes? See for yourself: 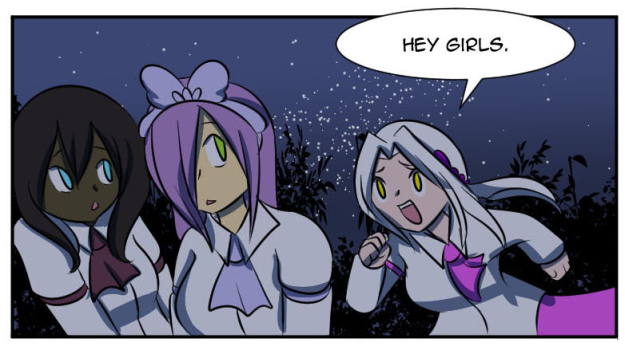 If you’re curious, that’s how the eyes for characters in Classes look by default.

I’ll give the author of Classes this much: she does choose her colors very well, and the shading is okay. Still, it’s pretty obvious when an artist chooses a semi-chibi manga style to hide the fact that the artist has a difficult time drawing things such as clothing. Yes, I know it’s challenging to keep track of things such as pressure points and how they would affect how a fabric wrinkles. But if a person doesn’t bother with that, the clothing can look like it’s skin-tight, or even floating in place.

As for the story, Classes is about a group of children who join a military academy that uses elemental magic. It’s about as cliche as it sounds, but because it’s in the anime style, there’s bound to be an extremely dangerous and competitive shounen-style field examination led by a severely disinterested proctor. Is that in there? Yep.

And while we’re discussing worn-out conventions, this thing where the characters are color-coded by the elemental magic types that they use is beyond stale. Sometimes, I suspect that writers do this to keep things straight for themselves. Is it too much to ask that writers express the creativity necessary for their characters to deviate at least slightly from the standard archetypes? Even the personalities of the characters seem to follow the color-coded conventions. For example, one character uses the ice element and has blue hair. No prize for guessing that she’s aloof and distant, that would be too easy. Once you’ve figured that out, it’s not much of a leap to imagine that she’s an overpowered child. It’s almost as though Classes was optimized for TV Tropes.

The main character is Kiwi, a young girl who is unrelatably irresponsible. If you thought Giga from Boss Rush Society was bad, Kiwi will make you wonder how even a fictional universe can host a creature so prone to bad decision-making.

I know that giving your characters flaws can make them more relatable, but going too far with the flaws can have the opposite effect. To give you an idea of what we’re dealing with here, Kiwi missed her own graduation just to goof off, and ended up missing out on gaining magical powers. She was allowed to graduate anyway, and was allowed to take the field exam without them, which goes to show that some people wanted her to die. She was also responsible in part for a huge disaster during the exam, wherein she was provided with just the substance needed to do so by chance.

Also, to give you a heads up, the narrative is sometimes broken without warning by non-canon sequences featuring the dog doing things like gender-swapping experiments. It’s tricky enough guessing the genders of some of the characters already, so these sequences didn’t help. They add nothing to the comic except to pad it out, which can really hurt if you just want to get it over with so you can get to writing a review about it.

I think it’s about time I got around to giving this webcomic its score. I’m a little surprised that I went out on it as much as I did, but Classes made some mistakes that brought to mind some problems that I’ve been noticing in creative communities, so I took an opportunity to vent a little bit. I know what some of you may be thinking: “But Raizen, webcomics like this are free. You get what you pay for, right?”

You know what else is free? Malware. And malware does take something away from people: their time. Time is something that a person only has so much of, and once they spend it, they don’t get it back. If someone doesn’t enjoy something, they feel like their time is wasted. A moment enjoyed is not wasted. Based on this criteria, I can give webcomics like Classes a score that reflects how I feel about the time I’ve spent with them. And on that note, here’s the score for the webcomic: Angry out of ten.