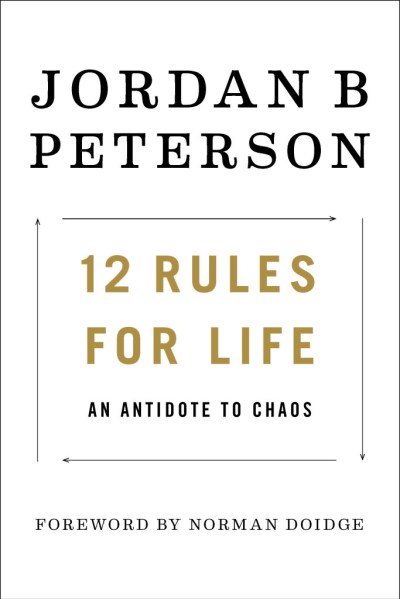 Lately, Jordan Peterson has caused quite a stir. This has largely to do with the fact that he’s a Canadian college professor that doesn’t toe the line for the left-wing agenda. He has also written a book that has gotten loads of attention, and has even been banned by a distributor in New Zealand.

Considering the controversy surrounding his book, it caught my curiosity, and I decided to go out and purchase a copy, wanting to know what it says. Because the hard left is making out Peterson to be some radical icon of the far-right, one might expect the 21st century equivalent of Mein Kampf.

The book is titled, 12 Rules for Life: An Antidote to Chaos.

Let’s take a look at some excerpts from Peterson’s book, and perhaps we’ll see just what’s got them worked up:

“Rule 1 – Stand Up Straight With Your Shoulders Back”

This would be the title of the first chapter of Peterson’s book, and my impression is that he’s trying to encourage good posture. One can understand why this would be beneficial; it’s not just about maintaining physical structure, but also boosting one’s confidence and presenting a positive self-image. That’s the impression that I get, which seems far different from an admonition to act like an early 20th century German dictator. I suppose that different people can take different things from the same message.

I’m kinda picking up a self-help or advice vibe. It’s really hard to argue with the point being made. Sometimes, people really do settle for some duds when it comes to friends, and the result is being seriously dragged down.

You might know someone who acted on a dare because they thought that doing so would result in them being respected. In fact, the person acting on it was being respected less, and was being treated as a toy for someone else’s amusement. It was easy for the one kid to ask the other to act on a dare, because the asker didn’t have to face the potential consequences of what he was asking the other kid to do.

Or perhaps you’ve seen someone who seemed a little disappointed to hear that you succeeded at something. That’s a sign that the person might not be that great of a friend.

So, Peterson is advising readers to seek out people that would make good friends. That doesn’t really sound like “evil monster” material, to me.

Here we go, now I’m beginning to see what the problem is. In today’s “post-truth” society where kids are taught that lies are acceptable as long as they further the cause, I can see why an admonition not to lie can cause some ripples.

One thing I’ve noticed while looking at the book’s illustrations is that the protagonist character depicted in them is actually a girl. If Peterson’s position is supposed to be sexist, that seems kind of counterproductive.

Again, there’s some serious self-improvement vibes, here. In fact, it seems like Peterson’s book is about building character.

Another thing about Peterson’s book and the few of his lectures that I’ve seen is that he seems to embrace theology, Christianity in particular, as being something positive for a person’s mind. That certainly goes against the idea that theology is outdated. Of course, most of humanity has been theologically involved throughout our entire history, even today in the modern age, so one can make the case that it’s something that humans are well-adapted to, and therefore is good for one’s mental health.

There does seem to be something about a theologically-inclined college professor who is a psychological practitioner that challenges perceptions about what those in the field are about. While one can argue about what his beliefs are and how he presents them, there’s something notable about the fact that he presents religion as approachable to those who might not otherwise consider it.

It’s a bit of a stretch, but the act of petting does involve gesturing your body in a manner that somewhat resembles a stiff-arm salute.

From what I’ve read, it seems like the point of Peterson’s book is “be a better person”. If the book were really intended as some manual on how to usher in a racist age of darkness, Peterson is mind-blowingly clever at hiding it.

Based on what I’ve read that Peterson has written and what I’ve heard him say, he doesn’t seem like he’s the monster he’s made out to be. But then, I actually listened to him speak for himself rather than just go with what some Tumblr snowflake was passing along in a deliberate attempt to make him look bad.

Peterson had twelve chapters in a book enumerating principles on living life, and he made one of them about petting cats. This is the guy that leftists are comparing to Hitler.

1 thought on “What is it about Jordan Peterson’s book that has leftists going crazy?”