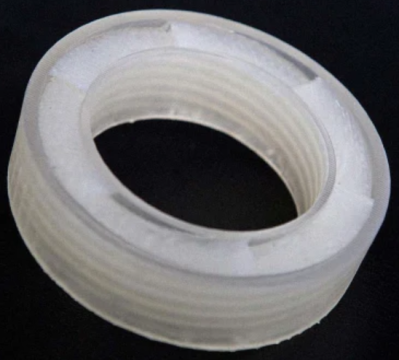 A team of Boston University scientists have discovered a material that blocks nearly all sound from passing through it. This material, dubbed by scientists as “acoustic meta-material”, can block 94% of sound, making even a loudspeaker inaudible to the human ear.

Leave it to scientists to discover something awesome but still fail to give it an awesome-sounding name. I think a great name for this stuff would be “shutupium”.

The material was mathematically-designed, so yes, math is still something that’s worth learning in school, especially if you’re interested in one day being involved in the development of awesome stuff.

One cool thing about this material is that it can be 3D-printed, so if you have a 3D printer, you can produce this stuff at home. Also, air can pass through it, but not sound.

I don’t know about you, but my head is racing from the possibilities of a material that can block sound. Obviously, there will be a new way to implement noise-cancellation technology in headphones. Better yet, it can also allow the rest of us to enjoy peaceful, quiet neighborhoods in spite of the annoying snots that drive around and listen to rap with their windows down just to annoy those of us who actually pay to live where we do. It would also be great for blocking out the barking from dogs whose owners moved into the city with them, not considering that everyone else would find them annoying.

And imagine what this can do to block noise at work. Those who work in noisy industrial environments might enjoy earplugs made from these things. But what’s really got me excited is that I could work and have no problem tuning out coworkers that continually fire off their BS cannons about stuff nobody cares about.

It would also be nice to have the windows open to let in some fresh air without hearing people hollering down the street. Come on guys, you can afford cell phones. As few as $20 might be all it takes to start you off with a phone and a simple plan.

Great work, scientists. While we’re hard at work making people less annoying, it would be great if they could invent something that could repel the smell of perfume or cigarette smoke. Or a pair of glasses that can make anyone look like a supermodel.